Prerequisites for All Users

This article shows how to create teams, assign resources to teams, and assign teams to projects. Also shown is the combined effort forecast, which includes team, skill, and resource-based assignments.

ResourceFirst allows for the creation and management of teams, not just individual resources. This is crucial to Agile project management, but is also valuable for any organization that organizes their work by teams.

This article outlines the steps to managing by team, including:

To create a team, go to the Teams tab in the Resource Center (accessible by clicking on the people icon in the main ResourceFirst icon tray in the upper left).

You’ll be presented the following screen. Note that the existing teams are shown, along with the Resource OBS node the team is created in, plus the velocity of the team.  There are icons to the right of each team to view/add resources to the team (the people icon) or to view/add team project assignments (the briefcase icon).

You can also make a team active or inactive. In addition, you can define up to 5 User Defined Fields for teams. See Administering Lists in the UDF section for more.

To add a new team, click the “+” icon on the upper left. To delete a team, select the row(s) you want deleted and click the trash can icon. The circular icon in the middle is to reload the screen.

When you click the “+” icon to add a new team, you’ll be presented with the following popup dialog. 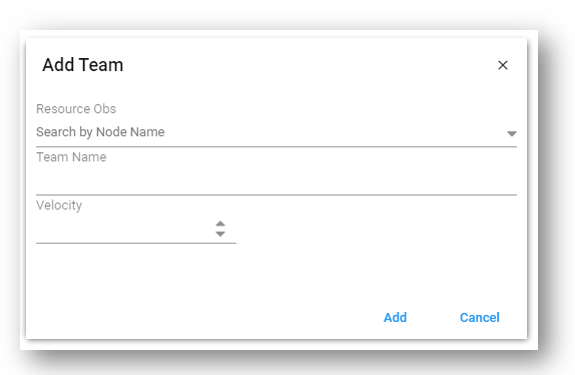 You can also set a team’s velocity by sprint. Do to this, on the Teams page, click the Velocity icon in the upper right menu bar.

You will then be presented with a Sprint/Velocity view, as follows, where you can update the velocity for each sprint per team: 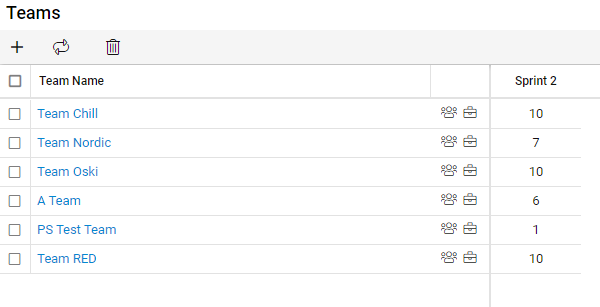 A Word About Velocity

Velocity is relative and varies from company to company.  Velocity speaks to the number of “user story points” the team can complete in a given sprint. Agile projects are planned and tracked in terms of story points. Velocity charts can show how many points the team is completing per sprint vs. the points that were planned for that sprint. Observing actual team velocity over time (i.e., how many points the team is actually completing per sprint) will allow you to revise the team’s standard velocity accordingly.

Since velocity is based in story points, and since there’s no real industry standard on the estimation of story points (some companies use T-shirt sizes, some use a relative number from 1-3, 1-5 or 1-10, some use blocks of 10, 50, 100, etc.), how you set velocity will depend upon your desired story point model.

The most common method is to use 1, 2, 4, 8, 16 to represent T-shirt sizes (x-small, small, med, large, x-large) to represent points. In this case, you might set the velocity to 30, which means the team can complete 30 points in a typical 2-week sprint. In any case, story points should be assessed depending on:

If you’re not using Agile project management or story points and simply want to track in teams, then just use 30 (or any number) for velocity. The field is mandatory.

Clicking on the people icon to the far right of any team row will take you to the following screen. On the left pane are your teams, along with icons to toggle between showing team resources or team project assignments.

The Team Resource view below allows you to add resources to the team and modify individual effort forecasts for the team members.

Important: Adding a resource to a team includes them on the projects the Team is (or will be) assigned to. Also, keep in mind that you will assign the Team to a project and apply forecasts values to the Team and not all of the individual resources. As a result, this forecast is applied to each team member based on their percent allocated to the Team.

See “Understanding Resource/Team Allocation Percentages” below the image for more details on how resource and team assignments work together.

The DAvail field represents the availability of the resource to the team. So, if you put .8, you are planning for the resource to work 80% on team activities and 20% on either another team or direct project work. The system will track that resource’s overall workload, across team work and non-team work.

NOTE: If you’re using hours, the calculations are based on hours, but the concept is fundamentally the same:

Once resources are assigned to teams, in order for them actually to be allocated to any work, the next step is to assign teams to projects. Click on the briefcase icon on the left pane to switch to the Team Projects view (or click the briefcase icon to the far right of any row on the main Teams screen).

Reminder: The effort forecast for the team is applied to each of the team members based on their individual allocation percentage to the team. It is NOT divided among them. 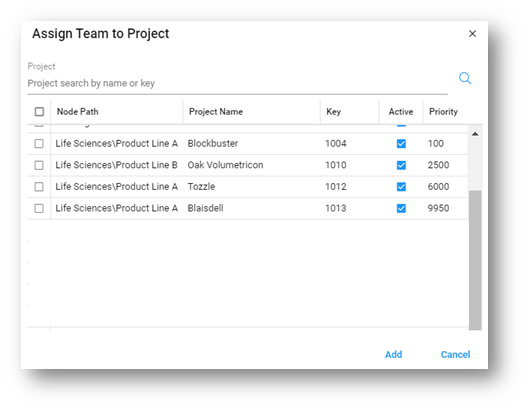 ResourceFirst is unique in that it allows you to see a combined effort forecast to the following types of work:

Forecast is shown in project priority order, and shortage indicators are calculated accordingly.

For example, in the image below, on the first row, Phil is assigned to a project called “Admin” for July at .80 of an FTE (80%).  This is an individual assignment (Type column shows “Resource”).

Further down the screen in July, you’ll see in yellow that Phil is also assigned to a project called “Forecasts” via a team assignment (Type column shows “Team”).  The amount assigned is .23 (which combined with his .80 individual assignment, makes him slightly overbooked, hence the yellow color).

Why did the individual project take precedent, while the team assignment is shown as overbooked? This is because allocations are calculated in priority sequence. The first project is a higher priority, while the team-based project is lower and thus considered overbooked.  To remedy this, Phil’s time on the team-based project may need to be reduced slightly (via the Teams tab). Team-based assignments are only created on the Team>Assignment page; they can not be created on the Resource>Assignments page. This approach is taken to maintain the integrity of the team assignments.

This is an important concept in ResourceFirst. All work (of all types) should have resources allocated based on their overall priority to the organization, not in silos of various methodologies.

For more on managing Agile projects, including assigning story point to sprints from the backlog, see “Managing the Agile Backlog” and “Managing the Sprint Roadmap” in the ResourceFirst Project Management section.